The Original Position is a central feature of John Rawls’ (1921-2002) social contract account of justice, “Justice as fairness”, set forth in A Theory of Justice.
The Original Position is to be a fair and impartial point of view adopted in our reasoning about the fundamental principles of justice. In taking up this point of view, we are to imagine ourselves in the position of free and equal persons who jointly agree upon and commit themselves to principles of social and political justice. A main distinguishing feature of the original position is the “veil of ignorance”: to ensure impartiality of judgment, the parties are deprived of all knowledge of their personal characteristics, as well as social and historical circumstance.
As a fundamental part of Rawls’ Theory of Justice, The Original Position can be seen as an apology for maintaining the status quo. It constructs justice on given practice, without considering that there may be problems of injustice embedded in capitalist social relations.
After receiving heavy criticism on his notion of the original position, Rawls emphasized its role as a “device of representation” for the idea of fair choice.
The title of the installation references the original position as a device for the implementation of justice, which includes failure in its own structure and being. But also, the title makes use of the purely descriptive aspects of the three words: the original position. That is to say, to identify the elements of the case at the stage they were before they inevitably changed during the proceedings of the case.
The installation consist of a color video projection with sound, and a framed newspaper photograph.
The newspaper photograph taken in a courtroom in the Helsinki District Court, was published as part of an article on the trial of Markus Pentikäinen, a press photographer.
The photograph showed Pentikäinen taking a picture of the interior of the courtroom, while he himself is being photographed by two other photographers in the same room. Finally, the picture as we see it is a take on the situation by a fourth photographer outside the frame of the image.
The photograph from the newspaper serves as a guide, a sort of script for the movement of the camera in the video.
The video incorporates a voice over, still images and a spoken word performance for which I asked Markus Pentikäinen himself to describe the room, to share his view of the courtroom where the image was taken. 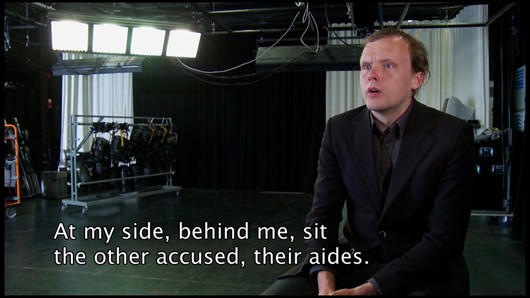 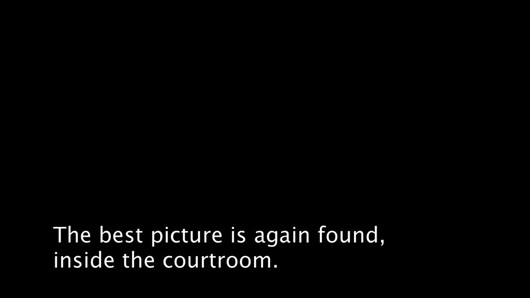 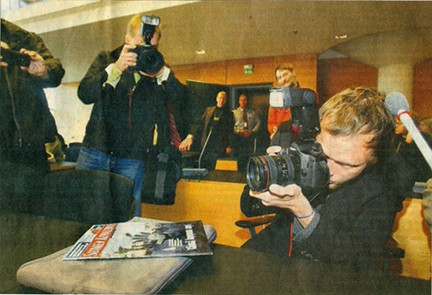